Out at School, An Introduction

2018
An initial script of Out at School, based on ten interviews conducted in the LGBTQ Families Speak Out research project (2014-2020), was staged as a multimedia verbatim piece at the 2018 L Fest in Llandudno, Wales. The initial script was published in Tara’s 2019 book, Teaching Gender and Sexuality at School: Letters to Teachers (Taylor & Francis).

2019
An expanded script of Out at School, based on 37 interviews conducted in the LGBTQ Families Speak Out research project (2014-2020), was staged as a multimedia verbatim piece at the 2019 Toronto Pride Festival. The expanded script was published and discussed in Tara’s 2021 book, Our Children are Your Students: LGBTQ Families Speak Out (Myers Press).

2020-2021
An audio-play script, based on 37 interviews conducted in the LGBTQ Families Speak Out research project (2014-2020), was created and recorded on Zoom in November 2020. This audio play will be launched on this website and on popular podcast platforms in March 2021. Right now, team member, Doug Friesen is mixing and editing Out at School - The Audio Play. Once it is complete, we will announce the date of our audio play launch in March 2021.

The LGBTQ Families Speak Out team would like to acknowledge the Social Sciences and Humanities Research Council for its funding of this research project from 2016-2020, and the New College Initiative Fund at University of Toronto, which funded the recording, mixing, and editing of the audio-play.

Pushing the Envelope, Let Love Be The Way, and Risk Hope are songs composed for Out at School by research team member, Kate Reid (www.katereid.net). These songs are based on the excerpts from our interviews with LGBTQ families. Feel free to download these songs below, and read what Kate says about the meaning of the songs. ​
Pushing the Envelope
Pushing the Envelope is the first song I composed for Out at School. The overarching theme in this song is the idea that LGBTQ+ families and students often find themselves in the position of having to explain their families, identities, bodies, pronouns, and relationships to school personnel. This labour of explaining is kind of labour that is particular to LGBTQ+ families and queer spawn, and a labour that cisheterosexual families and students generally do not have to do in schools. I also include some lyrics written in the form of questions. For me, writing lyrics in the form of questions invites listeners to do some of their own intellectual and emotional labour around some of the themes in the song. In this song, it asks them to consider how their own identities, relationships, and family-building processes might be similar and/or different, and how they experience privilege or barriers in schools and society in relation to these things. The lyric “we shall overcome” is a nod to the well-known gospel-turned-activist song We Shall Overcome, which was a prominent anthem sung during the American Civil Rights movement. This reference to We Shall Overcome is also an acknowledgement of the long tradition of singing in order to overcome adversity, galvanize community, and inspire social and political change. Finally, incorporating several phrases borrowed verbatim from the interview material, Pushing the Envelope projects a hope for the future: that one day, we won’t always have to be “pushing the envelope,” and that we won’t have to engage in this kind of queer and trans activist work any longer because LGBTQ+ families and people will be a part of “the fabric of this world.”  ~ Kate 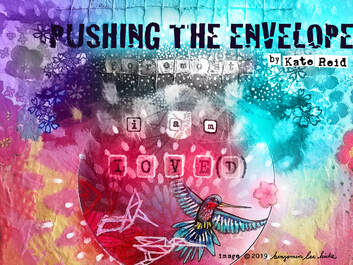 Download File
Let Love be the Way
When composing the second song, Let Love be the Way, the predominant theme in the second set of monologues I worked with was the notion that LGBTQ+ families and students often have to (and thus, feel compelled to) explain themselves and their families to school personnel. They do this either pre-emptively in order to avoid questions or problems that may arise in relation to their identities, relationships, and/or families; or in response to questions asked of them about these things. With this theme in mind, the entire song is composed of various questions directed at those who are generally afforded and experience privilege in relation to their sexuality, gender identity/gender expression, and relationships. In effect, the song asks cisheterosexual folx to do some intellectual and emotional labour related to the questions posed in the song. Again, as I was composing this song, I was thinking about some of the experiences I have had, as well as the experiences some of my LGBTQ+ friends have had in relation to their identities and relationships. The song references trans scholar and visual artist, benjamin lee hicks’ (2017) notion that LGBTQ+ families and students are not--but should be--expected in schools. And, like Pushing the Envelope, this song also contains a few short verbatim phrases from the monologues. The chorus references queer scholar, Lee Airton’s No Big Deal campaign (www.nbdcampaign.ca), which they developed in response to push-back on the University of Toronto campus around using people’s chosen pronouns. The song ends with an important question about what systemic change might look like in schools, rather than stopping at simply accommodating LGBTQ+ families and students. Ending the song with this question means these issues are not resolved in schools or society. This question invites listeners to think more deeply about the politics of power implicit in the word, “accommodation,” and to consider what it might mean for LGBTQ+ people to have to engage with a system that wasn’t created with them in mind. Let Love be the Way calls the audience to linger in feelings of discomfort and uncertainty.  ~ Kate 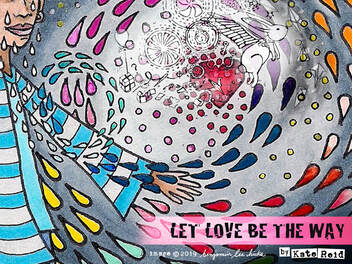 Download File
​Risk Hope
Risk Hope is the final song performed in Out at School. It was composed to tie the major themes of the LGBTQ Families Speak Out project together and to bring the play to a close. It rests on the notion of “hope,” which is a prominent theme in the play, especially near the end. It’s meant to summarize a major theme of this research project, the idea that storytelling—in all its iterations—is vital to creating social change. The song also drives home the point that taking action—even in seemingly small ways—is a performance of activism and an expression of hope for a better world. The theme of “listening” is also prominent in this song, as many of the interviewees from the LGBTQ Families Speak Out project told us that teachers and school administrators need to listen to their students, and listen deeply. The song begins with a reference to Bob Dylan’s 1964 song, “The Times They Are A-Changing,” and an acknowledgement that “the times” are constantly unfolding; that we as a society are in a constant state of becoming and moving forward—even if incrementally—towards equity and justice for all. In the bridge, the lyrics honour the work of cultural theorist and queer scholar of colour, the late José Muñoz, who understood hope as an anticipatory feeling of the “not-yet” and that queerness is “not simply a being but a doing for and toward the future” (Muñoz, 2009). Muñoz (2009) argues, “we need hope to counter a climate of hopelessness that immobilizes us both on the level of thought and transformative behaviors. None of this is to say that hope is easy to find or never misleading or potentially appropriated by reactionary agents and movements. Hope is a risk. But if the point is to change the world we must risk hope” (Duggan and Muñoz, 2009, p. 279). The song, Risk Hope, is also a nod to the researchers of the LGBTQ Families Speak Out project, and the creative work and energy that infuses Out at School: “these words” that were carefully chosen from the interviews to craft the monologues; “these colours” that were meticulously selected to illustrate themes from the interviews; and “these songs” which were mindfully composed to narrate the interviews through music.  ~Kate 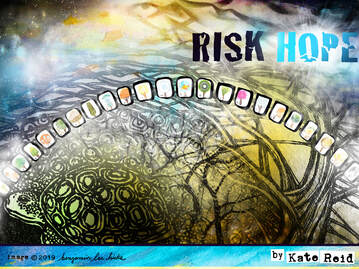